Thank you to everyone who took part in the auction and helped raise an unbelievable $35,900 for the next generation entering the automotive industry.

Every year during the Automotive Retailer Association’s (ARA’s) Annual General Meeting (AGM), our Automotive Retailers Foundation Inc. (ARFI) hosts an auction to help raise funds for those pursuing careers in the automotive aftermarket industry. All funds raised in the auction are then used for scholarships and bursaries for the upcoming year. The auction itself is usually one of the highlights of the AGM weekend, and this year was no exception.  The auction, which was held in a beautiful Whistler resort on October 1, 2022, hit a historical all-time high, raising a total of $35,900.

The collection of such an unusually high amount was in large part due to the Pedal Car Challenge, a hands-on educational program created by the ARA to expose more children in B.C. to the automotive trades. Students from across the province participated in this project, learning how to assemble, design, refinish, and paint a toy pedal car. Our intention was to then auction off the pedal cars to raise funds to financially assist students who would like to enter the industry through covering the costs of tuition and tools.

In conjunction with the school series challenge, the ARA also held a pro series challenge involving pro B.C. shops to showcase their talents and give kids an idea of what they could do with the Pedal Car Challenge. The ARA also unveil a surprise at the AGM—an all-female crew revealed their finished pedal car to showcase what women in the industry are capable of. And it was a big hit! We gave the team a chance to address the audience and tell them what it meant for them to take part in the project. Looking around the room, you could tell it had an impact on the industry.

When it came time for the ARFI auction, our intention was to auction off only four pedal cars. However, it was soon obvious that this program had made a huge impact on industry and everyone in the room. So, when John McDonald and Marc Bergevin from ADESA began the auction, the bidding war for the cars got intense (to say the least). The four cars were auctioned off in less than five minutes, and the audience was demanding more. Little did we know that “more” would have us auctioning off all the remaining pedal cars and raising $35,900 for ARFI. 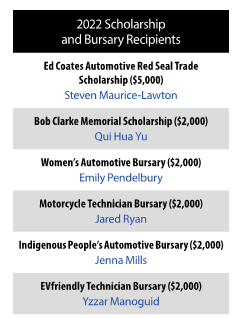 Never in the history of the ARA has an AGM auction raised so much money for the foundation. Our thoughts instantly turned to what impact this might have on the future of ARFI scholarships and bursaries. With this money, we could potentially help even more people get into this industry by assisting with the financial barriers of education and tools. As we learned from this year’s scholarship and bursary recipients, the financial factor is a struggle for many.

All of the ARFI recipients that were awarded scholarships and bursaries for 2022 were well deserving of the awards. All of them have a passion for industry despite the different sectors they are in. What they described as their biggest barrier to getting into this industry is their struggle with the cost of tools and tuition. Despite these struggles, they all had smiles on their faces when they spoke about their jobs and the reasons why they got into this industry. And this is all that matters, after all. Their passion for the industry is ultimately what will keep them working in the industry.